So, yeah. :) Been giving Beast a final look and thought I'd share a nice, sweet, little love scene. *wicked grin* 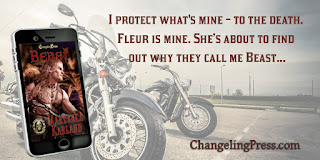 She arched her back, offering herself to him again. Again, he bit down on her nipple. “Beast!”

He continued to kiss, nip, and suck every inch of Fleur’s skin he could manage. She’d have little marks all over her body before he was done. There would be no doubt who she’d had in her bed. Beast intended for everyone in the fucking club to know it had been him.

Finally, when he could wait no longer to taste her, Beast shoved her up the bed and settled himself between her legs. She tried to urge him back up her body, but he was having none of it.

“I’ll fuck you when I’m good and Goddamned ready. Not a second before, Fleur. You’re mine to do with as I please!”

“And I need to eat this beautiful, wet little pussy. Guess which one of us is gonna win that battle, Sunshine?” She screamed at the same time he snarled before covering her pussy with his mouth in a tight suction.

Every pull, every drop of honey she gave him was like a drug. Beast doubted he’d ever get enough of her. He loved every single sound she made, the way her body broke out in a sweat when he turned her on, the way she responded to every single thing he did to her. This was… heaven. Beast had never known he was missing so much. Sex had always been good, but nothing like this.

Fleur’s cries grew louder and louder, her body tensing beneath his. Beast thrust one finger deep within her, and she screamed, thrusting her pelvis at him.

Beast had all he could stand. He was taking her hard and fast, not giving her a chance to change her mind. His next thought was to just plunge into her and worry about it later, but he couldn’t do that. Even though every second pained him, Beast crawled up her body and reached for the nightstand drawer to pull out a condom. He hadn’t intended to use one, but he just couldn’t do it without having a serious discussion with her first. Once he went inside her bare, he never intended to have anything separating them again.

Rolling the condom took precious seconds he didn’t want to waste, but finally, he was ready. Bracing himself on stiffened arms above Fleur, Beast found her entrance with the tip of his cock and thrust hard.

She was impossibly tight! He tried to halt his movements. Give her time to adjust. But Fleur was having none of it.

“Fuck it,” she bit out and shoved at him. Beast was afraid he was hurting her, cutting off her air or something, but when he pushed up, she heaved. He rolled to his back. The next thing he knew, Fleur was straddling his hips and impaling herself on his length.

“God! Fuck!” Beast gripped her hips, trying to slow her movements, but she was persistent, slapping his hands away.

Then he looked up at her.