I'm back with Changeling Press! Okokok, so I never really left. I just had too much going on and I wasn't making deadlines and just stopped submitting. Fortunately, being friends with the owner has it's advantages. That and I'm just too cute when I pout. :D 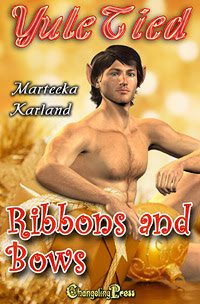 Samson Redding has everything he could want -- everything money can buy. But for all that, he's alone. He's been pursuing the lovely Jerrica in an online relationship, and he's ready to take it to the next level, but she's not ready.
Samson's thought of the perfect way to change her mind. He convinces Jerrica to meet in person -- at a BDSM club he knows she'll love, once she wraps her mind around it.
It may take more than ribbons and bows to tie his woman to his side, but Samson's up for the challenge. The rest? That's up to Jerrica.

"Did you tell anyone who I was in order to set me up for Christmas, Tasha?"

He almost breathed a sigh of relief. If she'd told anyone about this, it could get back to the woman he'd set his sights on. He did not want to risk it. Still the situation amused him. "Tasha --"

"I know, I know. But wait until you meet her. You'll see what I mean."

"I actually believe you," he said, grinning. "Though I have no idea why." He'd thoroughly investigated Jerrica after meeting her online at one of those dating sites. At first, she'd seemed too good to be true, but, the more he found out about her, the more he liked. Really liked.

"Because you know that, as a sister who adores her big brother, I would never do anything to make your Christmas miserable." She beamed at him as if she'd just given him irrefutable proof she was on the up and up.

Samson chuckled. "Yes. There is that."

"Sweeter than you?" The corners of his lips tugged when Tasha flushed and swatted at him playfully before fluffing his beard again. But that sense of expectation ramped up to full force. His heart sped up with the anticipation building inside him.

"Yes, dear brother, sweeter than me. Though I doubt Mom and Dad would agree with your assessment of me. I was many things as a child. Sweet wasn't one of them."

Samson found himself laughing. "True. I suppose 'spoiled brat' comes closer to the truth, but we were all good with it."

She shrugged unconcernedly. "Occupational hazard. Being twelve years younger than you and born to parents in their forties. I regret nothing."

"And the only girl in three generations. Don't forget that."

"Yeah," Tasha said brightly. "That too."

This whole thing had been Tasha's idea. Samson owned luxury malls all over the country, as well as many other real estate and entertainment ventures. She'd talked him into taking one day a couple of weeks before Christmas and closing the mall in their city to all but invited guests. The "guests" had all been children from the city and a few surrounding communities where poverty abounded. They had no idea why they were being invited, only that transportation with families had been provided and that lunch was free. In an hour or so, a couple thousand people would converge on the place. He had agreed to give every child coming what they wanted most for Christmas.

Though his accountant had nearly fainted, Samson had to admit he felt good about it. He wasn't certain about the number of actual children he'd committed to but even if he spent a couple million, it wasn't like he couldn't make the amount back in a few days. There wasn't much he wouldn't do for his little sister.

The fact that he'd "arranged" for Jerrica Green to work with and meet his sister was a stroke of genius on his part. Knowing Tasha, he'd expected her to do something around Christmas to bring him and Jerrica together.

Assuming Jerrica turned out to be the woman he thought her to be, which he'd had no doubt she would.