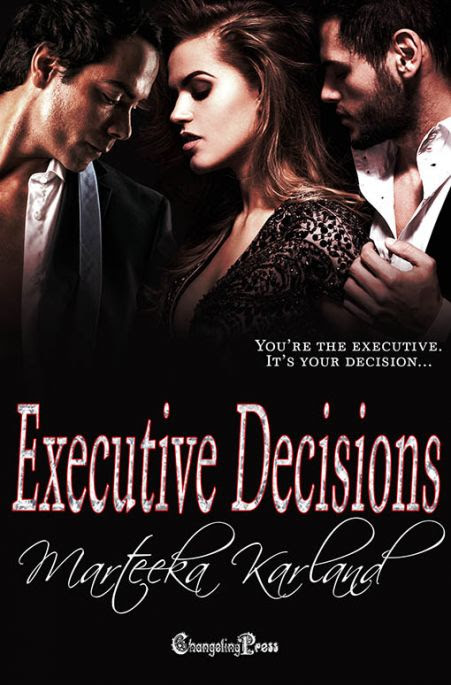 Excerpt from One Night Only, book two in the Executive Decisions collection!

No. She couldn’t do it. It would tear her heart to shreds tomorrow.

She hung helplessly suspended by tendrils of air and watched them advance on her. What would she do if they forced the issue? She knew she was powerless to tell them no. They’d know her heart wasn’t in it because they’d always been able to tell when she was lying. She wanted them both with every fiber of her being -- she just wasn’t sure she could give them up when it was over.

“Guys, I’m serious.” She tried one last time to make them see reason before she spread her legs and hoped they fucked her senseless. “I can’t do this. I really can’t.”

“Can’t?” Raven asked. With a flick of his wrist, a thread of air lifted the simple cotton dress from her body, leaving her floating slowly toward the bed in nothing but her panties. She blushed and swallowed the groan. Granny drawers. Of all the things she could have worn, she’d put on granny drawers this morning. “Or are you just afraid?”

“Does it really matter?” She tried to cover her breasts with her hands. Hiding the granny drawers would be impossible.

“It does.” Hawk flourished his hand and her arms were gently pulled away from her chest. “Don’t cover yourself, Sophie.” His voice was husky and his face became hard, as if he were angry. “Don’t ever cover yourself in front of me.”

Raven glanced at his brother with an annoyed look. “Either of us.”

Hawk blinked and shook his head. Sophie was gently lowered to the bed, and she scampered backward to grab a pillow to shield herself despite his warning. She couldn’t help the shiver of anticipation, and she knew she’d creamed her granny drawers but good. Would they leave her in peace now?

“We can’t?” Raven raised an eyebrow. “Do you honestly think this wasn’t set up with that specific purpose in mind?”

Hawk looked shocked, then his features melted into a smile. Finally he chuckled lightly, followed by all-out laughter. “That sly, conniving witch.”

“Would you have dared it otherwise?” Raven, ever the serious one, merely rolled his eyes and shook his head at his brother’s lack of emotional control. “Go secure the doors downstairs. I’ll have a talk with our reluctant charge and explain things to her.”

“Whatever you say, brother. But if I come back and she’s worse than when I left, I’ll have to turn you into a goat.”

Still chuckling, Hawk left the room, and Sophie heard him skip down the stairs. She was left with Raven and, if it was possible, was even more anxious than before.

“You’re not going to leave, are you.” She made it a statement because there was no question the two men would take what they wanted. They always had.

“No. But I want to know why you’re so reluctant. Don’t you find us appealing? Have we been so rotten over the years that you can’t even give us one night?”

All Sophie could manage was to swallow and shake her head. She clutched the pillow to her chest as if it were the only thing saving her from certain doom. How could she tell him the reason she couldn’t was because one night would leave her longing for every night for the rest of her life?

“Then what’s the problem?” Raven sounded so reasonable, she felt like a petulant child not answering him, so she sighed and bit the bullet.

“I can’t do one night with the two of you, Raven, and it’s cruel of you to ask it. Even worse than that, your grandmother is in on this.” Speaking it aloud hurt more than she imagined it would, and she had to swallow the lump in her throat. There was no way she could go home after this. She’d always look at the men -- her men -- knowing she could never have them, and she’d feel awkward in front of Mrs. Grinnich. She obviously expected Sophie to have sex with her grandsons, but what was supposed to happen after tonight?

Raven narrowed his eyes. “Why would you think less of Mamaw for this?”

“What happens to me after tonight, Raven? What happens to the three of us?” She was shedding her self-control in her embarrassment and anger. Besides, she might not have always been comfortable around Raven, but he was a constant in her life. Someone she had come to rely on. Someone who had always been there, and she expected would always be there -- no matter what happened after tonight -- in some form or fashion. “Do we pretend this didn’t happen? Do we go on our merry way and forget what we did? Hell!” She dropped the pillow in her agitation and crossed her arms under her breasts. “We haven’t even done anything, and I already feel like there’s no hope for my future. Trust me. This isn’t a good idea.”

Hawk cleared his throat, making his presence known from the doorway. “Pardon me for saying,” he drawled as he leaned against the frame, “but neither of us has mentioned anything about a one-night stand. Who says this has to end here?”

Sophie opened her mouth to respond -- though she had no idea what she was about to say -- when Raven advanced on her. “Enough. I want you. Now.” He shed his slacks and button-up dress shirt so easily, he had to have used magic, though the spell was so subtle Sophie couldn’t see or hear him initiate it. “If you truly find me so repulsive, say so now. Otherwise, I plan on giving you a night none of us will ever forget.”

Before she could utter a single word, Raven was on her. His mouth found hers effortlessly, and he coaxed her tongue into his mouth. Sophie’s head spun as he pushed her back into the plush pillows and settled himself between her legs. Her belly clenched and her pussy throbbed, burning and tingling in anticipation. He smelled divine! Clean, masculine scents surrounded her in a spicy aroma that tickled her nose. Mint lingered on his tongue and in his mouth, encouraging her to sample more and more until she was kissing him back as vigorously as he kissed her.