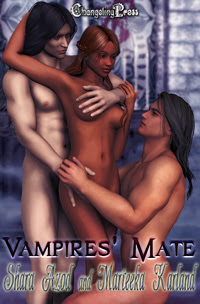 by Shara Azod and Marteeka Karland
BUY IT!

It takes a brave human soul to dare offer themselves up to a Vampire Dungeon. Demetri and Vlad are vampire royalty, so they've seen their share of submissives come and go. The one they name Blossom, however, piques their interest like no other ever has. Together, they intend to discover if the little human has what it takes to be the Vampires' Mate.

It took a brave human soul to dare offer themselves up to a Vampire Dungeon. Vlad and Demetri watched the little human woman as she went through the intensive screening. Chances were good if she'd gotten this far inside their secret little playground that she would make the cut to possibly become the plaything of their esteemed group of Vampire royalty. Pre-screening was many times more rigorous than the screening done at the Dungeon. The little human would do nicely.

"Look at that mouth." Demetri didn't bother trying to hide the impressive erection straining the crotch of his leather pants. Things like modesty were solely human concepts.

"Look at that ass," Vlad murmured, openly caressing his own very hard bulge. Demetri's friend had a point. She did have a very nice, full bubble butt. Perfect for a rough ride, if she was willing. Her application here showed that she was very, very willing. The Dungeon was picky about the human females they allowed in. Once she was admitted, she would wait, nude and in position, for a member to approach her. No female, human or otherwise, was allowed to choose her potential companions. They could refuse until someone to their liking came along, but they were submissives. They were expected to always bend to the wills of the Masters.

She was bent over a bar, the silver metal hitting her at the tops of her thighs. Her hands were splayed wide on a wooden "coffin" where all the subs presented themselves. The goth theme was strictly for show, but it made for an impressive sight. Several other men and women joined her, but Vlad and Demetri only had eyes for her. The creamy, milk chocolate of her skin seemed to beckon them like no other woman's ever had. The smooth, rounded globes of her ass jiggled and bounced with every movement of someone down the line.

Demetri let his senses flare out to the dark beauty. She was highly aroused, yet nervous. She had every right to be. Submissives, once selected, were put through a series of tests to see how well they could stand up both mentally and physically. Admittance into this world wasn't something the Vampire royalty took lightly. Their subs were expected to withstand rigorous sex in any and every form imaginable. From pleasurable and erotic, to painful and almost unpleasant. A sub wasn't supposed to be concerned with his or her pleasure, but the pleasure of the Master. Some Masters treated their subs as treasures. Others...

Demetri liked to think he and Vlad were somewhere in between. That didn't mean they'd take it easy on their woman. She deserved to know exactly what she'd gotten herself into before things went too far. For some reason, he believed this human would be able to take it. There was something about her that called to him. It was in her unseen essence. Most humans had no idea they emitted it, but it let a Vampire know exactly the depth of their desires and needs. Hers wrapped itself around his cock and stroked it. Her aura screamed sub, the sweet innocence of her face an exclamation point on the unseen siren's call.
at 20:22