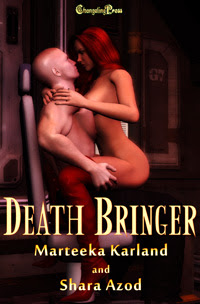 All Tyr wants is a stiff drink and an easy woman. He isn't the hero type. The lost little socialite who wanders into the roughneck cantina is not his problem. Let someone else escort her back to the Sky City where the rich and powerful live.
Only when she starts to get the wrong kind of attention, Tyr can't turn away. Those luscious curves and flame-red hair are like a beacon, and he's not immune. When she tells him what she wants -- well, now, isn't she lucky he's in the mood for a little down and dirty?
How could he know the succulent little Arienne is his next contract, should he choose to take it? And who could guess she's just the woman to bring life to the Death Bringer?
at 19:33