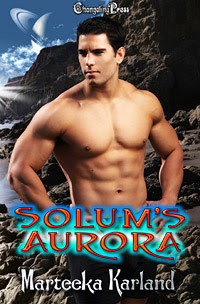 Deep in the hostile Aurora Nebula, the planet Solum is home to a myriad of different cultures. Men and women who have built lives against the odds in this dangerous environment find love and adventure as they risk everything to bring life to Solum. All the while, the nebula surrounds them and provides the perfect backdrop for a sexy seduction.
This collection contains the previously published Hot Flashes Sealed with a Kiss, In A Different Light, Flash Dance, Taken by Surprise, and Yule Tied.
Publisher's Note: Although "Solum's Aurora" is primarily a collection of male/female erotic romance, please be advised that the short story "Flash Dance" contains male/male sexual encounters.
EXCERPT!
Captain Daxon Sha'gar's vivid violet gaze roamed Marie's body hungrily. Her light gray work unitard must surely give him an eyeful, for it hugged every curve of her body, including the painfully hard nipples she knew were not hidden beneath the built-in bra.
God! The man was gorgeous! Her breathing quickened as she took in his angular features. She hadn't been this excited for a man in her whole life, and she'd only seen him for a few seconds.
He quizzed her for almost three hours on technical and operational issues in the quiet back room of a local pub. The inquisition wasn't abnormal; after all, she was hoping to be his computer and mechanical engineer. The length was another matter entirely.
She became restless after an hour, edgy after two. When he began repeating himself at the beginning of the third hour, she could feel her face heating up with her anger. Still, she needed this job, so she put up with it.
After telling him for the second time that the only Oscillation Overthruster she'd ever heard of was in a Buckaroo Banzai movie, she snapped. She planted her hands on her hips, knowing it would thrust her breasts forward and would probably cause his attention to wander. Sure enough, his gaze fell from her face squarely to her heaving chest. Inwardly, she rolled her eyes. So, Captain Hot-to-Trot liked what he saw, too.
But irritation was her predominant emotion and he had to know he could only push her so far. "Look, buster. Are you going to hire me or not? I could go to any skin bar in this crummy sector and get my tits ogled and I'd at least get paid for it."
When he opened his mouth, she added, "And it wouldn't take three fucking hours, either." His smile was slight, but acknowledged her statement. She was a little shocked at him for not denying it, as most men she knew would have.
"In that case, you're hired." His expression was mild, but completely unreadable. "I'd hate for you to have to make your living showing your tits in a skin bar." He glanced at her bosom once more. "Some of the clientele in those establishments aren't content to simply ogle."
He rose smoothly, muscles playing under the snug, black pants molding his thick thighs. Marie was considered average in height for a human female. She wasn't sure where her new captain was from, but he made her feel positively tiny.
She probably hit him about mid-chest, if she was lucky, and the amount of muscle on this prime specimen of manhood was matched only by the amount of muscle between his legs. Those snug britches clung to one healthy, mouth-watering bulge, and Marie wanted to explore every square inch of it.
Along with the rest of him.
As he rose, she followed suit and extended her hand. He simply looked at it until his bewildered eyes met hers once more.
"It's an Earth tradition to shake hands after a deal is made," she said. "It means the negotiations are over and the deal won't be changed on the word of both parties."
"Ah," he said and smiled. "On my planet, we also have a custom." He moved toward her with the grace of a feline. A feline stalking his prey. "We seal our bargains with a kiss."
at 19:08